What Story Is Your Life Writing?

What story is your life writing? What kind of legacy are you building every day? I didn’t ever think about this until my mother and grandmother died within seven months of each other in 1992 and 1993. Being the oldest grandchild on my mother’s side of the family, I suddenly found myself being identified as the one to carry on the family traditions. 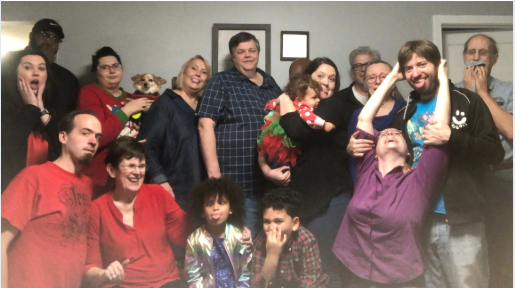 It has become a family tradition for us to take a crazy group picture of our family at Christmas. I love my family.

Those traditions included bringing the family together around recipes that had been in our family for years. We had a habit of getting together often and feasting nonstop. It had been our habit for as long as I could remember. Now, that duty fell to me.

My first inkling of this was when I inherited all of my mother’s and grandmother’s recipe boxes and recipe books. My great-grandmother’s recipes and books were also in the mix. Not only did everyone want copies of these, but also every time we got together I felt obligated to make something they would have made.

This was before I was intent on going on my weight loss lifestyle change journey. Still, it felt like a huge burden to carry. It was also the year I turned 40. All of a sudden I felt very, very old. The matriarchs in our family always set the tone. What tone was I going to set for our family?

Even though at that time I wasn’t fully embracing my need for habit change, I did realize I needed to lose weight and the family recipes were not helping. They are all high in sugar and carbohydrates. However, not wanting to hog all the family recipes, I decided I would make a cookbook that included the favorites people were asking for.

Since my daughter was two when my mother passed and barely three when Grandma passed, I decided to add stories about the great women in my family. I included pictures of them, which I also inherited or discovered along the way.

Over the course of several years Grandma’s Kitchen Cookbook was born. I also included poems I had written, saying and advice they gave. I did this before Amazon KDP made it easy to self-publish books.

However as a newspaper publisher I did know how to design pages. So I put together the cookbook that I had quick-printed and spiral bound. I guess you could say I made a book before it was easy to make books. I gave it away as gifts to my family and sold it at cost to those who wanted extra copies.

The copy I have says the first printing was in 2000, but I do think it was much earlier than that. By 2000, though, I knew I had to make changes in how I ate because a cardiac surgeon had told me in 1999 that I only had five years to live if I didn’t lose weight.

I weighed 430 pounds at that time, but I hadn’t yet embraced the fact that I needed to give up sugar for good. I still thought I could eat a little and be OK. I hadn’t figured out that I was a sugar and comfort food addict.

By around 2009 that fact had hit me full on. I began my lifestyle change journey in earnest giving up sugar and gluten. In the final analysis by 2013 I had lost over 250 pounds. One day it dawned on me that there was probably not a recipe in that cookbook that I could cook and eat.

There were a few that I remade with ingredients I could have, but of course they did not taste anything like what my ancestors had made. Yet those were the recipes that I swore I couldn’t live without.

I had realized my metabolism was so broken that I needed to eliminate the sugar and flour from what I ate if I wanted to live the life God had designed for me. So I put away the cookbook. I didn’t make any more copies because it made me feel a little bit like a drug pusher.

I knew those foods had become very addictive to me and I did not want to perpetuate them to the rest of my family and extended family, especially any new little ones who might make their appearance.

That’s when I decided that the story I wanted people to remember about me would not center on the foods I served. It would be more centered around people, doing things together, talking with each other, doing art projects, taking silly pictures, playing games, becoming more acquainted with each other and worshipping God despite our differences.

After all, it’s these memories that last beyond where we are today, not the food. It’s that fellowship that binds us all together in a common bond that is deeper than just some very addictive and fattening foods we eat on certain days.

It’s the mental, emotional and spiritual bonds that hold us together. The physical bonds are already there. They are in our blood and in our shared connection with those who’ve gone before us. For me there is no greater story than what we write on the hearts and minds of our children, but as an author I also wanted to share advice in a written form as well.

Although people might be able to find an old copy of Grandma’s Kitchen Cookbook in the future, I hope they will also find the other books I’ve written where I share my journey out of sugar and comfort food addiction.That is the real story of my life that I want to leave.

What Is Your Life Story?

I was listening to an author tell about a dream he had. In the dream he saw an old man with lots of children gathered around him.

The old man was recounting the story of their great, great, great grandfather and grandmother,. The old man was telling how his ancestor wrote many books of which they still had copies and how he sat in motion the many blessings of God they each were enjoying that day.

At the end of the story, one of the youngest child in the dream asked his grandfather, “What did our ancestors look like?” The grandfather pointed to a large picture over the fireplace and said the name of the author who was having the dream and his wife

“That is your great, great, great grandfather and grandmother,” the old man said. “They started the blessing for our family.” When the author saw that it was him and his wife in the picture, he wept.

He realized that by writing books and by writing truth on the hearts of his children, he and his wife had left a life story of love of family and God that will perpetuate for generations to come.

What Legacy Will You Leave?

What do you want your legacy to be? Will it be one of rich and decadent foods or will it be on centered on health, family and God? Your story doesn’t have to be written in books for generations to come to read. It can be instilled in the lives of your children and grandchildren today.

Whatever story you story you desire to leave behind, be intentional about it today. Know that every day your children and your grandchildren are watching how you live your lives. You are literally writing the story of your life on their hearts every single day. Make sure it is the story you want them to read and internalize.

By the way episode 8 of Sweet Grace for Your Journey podcast has more to say on this subject.  You can listen on Apple podcasts, Stitcher app, Spotify or on my website by going here: https://teresashieldsparker.com/episode-8-leave-a-legacy/