I walked into the youth parents’ meeting huffing and puffing. I was late as usual. There were more parents there than expected so the meeting place had been moved to the general purpose meeting room with the orange chairs.

Not that I am against orange chairs. I love orange. I had orange roses in my wedding. In general, I love chairs. I sit, a lot. Who wants to stand when they can sit, especially if their ankles, some of the smallest parts of the body, are holding up over 430 pounds? There was only one restaurant in town where I could sit in a booth because I knew the tables moved so I could make room to get in. Chairs of any kind, though, were a problem. 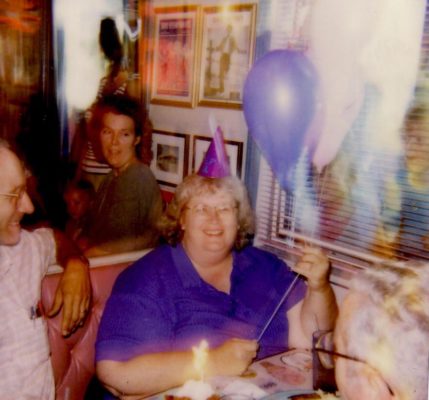 At 430 pounds, I could fit in these booths because the table moved.

One has to understand the difficulty with these particular chairs. They were metal chairs with padded seats and backs and square armrests. They were sturdy enough for me, but  they had a defined, very limiting space in which to place one’s bottom. Suffice it to say, I didn’t fit well in that space. In addition, the chairs were hooked to each other so moving them was extremely difficult.

The meeting had already started when I entered the room. There were seats available, but they were all in the middle of rows of people. I could decide to shake my expansive booty in the faces of the unfortunate individuals who had chosen to sit in the row with the empty chair. Once there, I would lap over those on either side trying to suck my breath in to make myself smaller.

I didn’t want to miss this meeting about my son’s first mission trip to Mexico. So, I stood in the back. After about 10 minutes, Rick, a true gentleman, stood and offered me his chair. That was nice of him especially because he was on the end and his wife was small, so I wouldn’t interfere with her space too much. Plus, knowing her, she wouldn’t mind if I did.

There were those in the church who would mind, or at least I thought they would. Those thoughts went through my mind often. The truth is, thoughts about me weren’t on most people’s minds.

Most people, me included, think constantly about one thing—themselves and their problems.

Most people, me included, think constantly about one thing—themselves and their problems.

Each time I walked into my church I scanned the room for the answer to my unspoken question: Am I the largest person here? I did a quick size assessment of the masses. If the answer was no, I breathed a sigh of relief. If the answer was yes, I felt self-conscious almost as if I had a sign on my back that said, “DANGER: Fat is contagious.”

One of the first Sundays I dared to help with my son’s four-year-old Sunday School class, a rather precocious little boy with blonde hair came up to me and said, “Hi I’m Jimmy.1 I’m four. Why are you so fat?” Without waiting for an answer, he ran off to make sure the house made out of fake cardboard bricks was properly constructed

At that time, I was not at my highest weight. I know I weighed over 350 pounds, though. To a four-year-old, I loomed as a giant. He left me to ponder my answer to his question.

Every extremely overweight person has a list of excuses about why they are overweight. We don’t rattle them off to the average person on the street. I’ve never met an adult who would dare ask Jimmy’s question. I have, however, met many people who looked at me, sighed, shook their head and walked on. Their unasked questions, as well as my unspoken excuses, loomed in my mind.

I could pontificate about all my excuses, instead I’ll just list seven. They may be some of the same ones you’ve had. I’ll also share the truth God showed me about these excuses which are just lies in disguise.

I can’t afford to eat healthy. Buying healthy food for yourself and your family will cost less in the long run provided you eat that and nothing else.

A good mother keeps snacks (i.e. cookies, chips, etc.) available for her kids. Feeling better, becoming healthier is worth every minute of doing without chips and cookies.

It costs too much to join a good weight loss group. Finding the right accountability group, is worth its weight in gold, will save you money and help you stay on track with your health.

I can’t exercise. The truth is there is some part of your body you can move. Start there and increase that time each week.

If God wanted me to lose weight, He’d have given me a high metabolism. God knows our issues and has given us tools to help fight the difficulties of this life, including the pull of an unhealthy lifestyle and of food that is not good for us.

Nothing ever works for me. I just can’t lose weight. When life gives you lemons, make lemonade with stevia!

Here’s what God has to say about all of our whining and excuses. “The world is unprincipled. It’s dog-eat-dog out there! The world doesn’t fight fair. But we don’t live or fight our battles that way—never have and never will. The tools of our trade aren’t for marketing or manipulation, but they are for demolishing that entire massively corrupt culture.

“We use our powerful God-tools for smashing warped philosophies, tearing down barriers erected against the truth of God, fitting every loose thought and emotion and impulse into the structure of life shaped by Christ. Our tools are ready at hand for clearing the ground of every obstruction and building lives of obedience into maturity.”2

The absolute truth about my life when I weighed 430 pounds was every orange chair was just another time when God whispered gently and softly to my soul, “My daughter, it doesn’t have to be this way. Take My hand. Let Me lead you.”

Eventually I did just that. In the process I have lost over 260 pounds and guess what? Our church got rid of those horrible orange chairs.

1Not his real name