A Mother’s Marriage Wish for Her Daughter

I always thought my daughter would get married in a big church wedding with a long bridal gown and a groom in a tuxedo with six bridesmaids and groomsmen and hundreds of people in attendance. I thought it was my marriage wish for her.

Then she went to Japan to teach English. The young man she was in love with was also going to Japan. They spent a year and a half there before they decided they wanted to spend the rest of their lives together and got engaged. Their plan was to get married in Japan. However they wanted their families there. 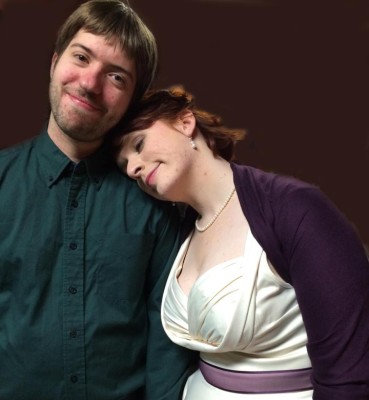 Their compromise was to have a small wedding with immediate family along with a post wedding party with some of their friends and then when they come back to the states in several years they would have a bigger wedding. I wondered if it would be enough the first time to have a small ceremony. Would she regret doing it this way,especially if for some reason there is never the bigger service?

The truth of the matter is there wasn’t time for her and Nigel to be involved in the planning of a big wedding now and now is when they wanted to get married. So they got married and plan to hold a large wedding celebration when they return to the states in a few years?

I went along with it, but I really wasn’t sure if it was the best choice. I wondered how they could make their actual wedding day, the day they are officially married, memorable and important.

I shouldn’t have had to wonder. Without music, without fanfare, without a lot of hoopla, they were married. They recited vows they had written.

The vows alone made the ceremony. I don’t have them to share in this post, but they characterize the commitment of two people determined not only to love each other and support each other in being two whole people pursuing their dreams and God’s will for their lives.

I promised myself I wouldn’t cry because my now son-in-law doesn’t like tears at joyous occasions and this certainly was joyous. However, I have to admit to a trickle when my daughter in her vows said something to the effect of she is not very decisive and those who know her will agree, but “this decision is the easiest I have ever made.” As her mother, I know that means this is the real deal.

And my son-in-law said Jenny was not his better half because she is a whole person. He also said he would support her in becoming all she is meant to be.

Before the wedding my daughter and I were talking. She asked me, “Mom, how are you doing with all of this?”

“The wedding you mean?” I aked.

“Yeah, me getting married to Nigel.”

I told her that I had pondered when she got engaged what kind of man I would want her to marry. I came to the conclusion that my daughter as a strong, secure woman needed a man who would not be intimidated by her strength of character and her intelligence, but would encourage her to soar to even greater heights than where she is. He would have to be a strong, secure man who would not lord his manliness over her, but would walk along side her. She chose well.

I also know she chose a peaceful, intelligent, godly man like her father. And because of that, I know they will have a long and happy life together.

In her vows she promised to take care of her health in order to live a long life with him. I especially loved that part. I want her to be healthy and live a long and abundant life.

They promised to put God at the center of their lives. They began their marriage in prayer. They have built their lives on the foundation of faith.

I could not be any prouder of them than I am at this moment.

I wish them many years of filled with the joy of living in the abundance of God’s grace, mercy and blessings understanding and knowing His presence is ever with them.

I rest in the peace of knowing not that Jenny is in Nigel’s hands, but that Jenny and Nigel are in God’s hands.

A mother could wish for nothing more.