“Your dad and brother are here if you need anything,” I said. She was 10, old enough to stay by herself, but I felt better knowing others were around. 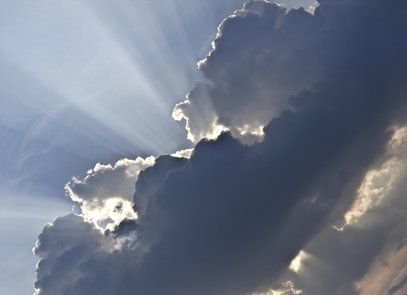 I told my husband where I was going and that Jenny was taking a nap.

She woke up an hour later and went to look for them. The house was dark and eerily silent. She called for her dad and brother and looked everywhere in the house. Her dad’s car was in the drive.

She panicked. Where were they? They wouldn’t just leave unless…

This was before cell phones. Who could she call? She tried a couple of numbers, but it was Saturday and people were gone. She turned on the radio and couldn’t hear the Christian station. Of course, in the house it was hard to get that station.

Finally, she called Poppy, her grandfather, and sure enough his wife picked up the phone.  Jenny was sobbing by now. “I’m so-o-o-o glad you’re there.”

“What’s the matter? Are you hurt?” her step-grandmother asked.

“No, everybody is gone and I was afraid the Rapture happened and I’d been left behind.”

In a few minutes, her dad and brother came back. They’d gone for a bike ride.

The movie, Left Behind, had just come out in theaters. I guess they did a really good job of showing what happens when all believers are taken out of the earth before the Second Coming.

A remake of the movie will be released Oct. 3, 2014.  Dates and times surrounding the actual hour when believers in Christ are taken out of the earth isn’t known. However, the Bible has some interesting things to say about this time we have come to call, The Rapture.

“For the Lord himself will come down from heaven, with a loud command, with the voice of the archangel and with the trumpet call of God, and the dead in Christ will rise first. After that, we who are still alive and are left will be caught up together with them in the clouds to meet the Lord in the air. And so we will be with the Lord forever.”1

Perusing through the end time events as mentioned in the Bible can be  confusing. The outline of events after the Rapture, when Christians both living and dead are taken to be with the Lord, includes several events. Below is a listing as I understand it and as my pastor, Jeremy Risner, explained. Don’t freak out if we are wrong. We admit to not knowing everything!

When will this happen? The Bible is clear: No one knows the date or time. Scriptures do tell us that we need to keep watch and “be ready, because the Son of Man will come at an hour when you do not expect Him.”2

However, there will be signs, like birth pains. There will be wars, rumors of wars, famines, earthquakes, persecution and wickedness increasing.3

The important thing is not when Jesus is coming but to be prepared for His coming. “jesus is coming back,” Risner said. “I better be ready and I want to help others be ready.”

How can we do that? Jesus answers that question when He says, we should be like faithful and wise servants, “Whom the master has put in charge of the servants in His household to give them their food at the proper time. It will be good for that servant whose master finds Him doing so when He returns.”4

Jesus, of course, referred to Himself as the bread of life.5 Those who are hungry eat and live, receiving the gift of salvation

“The sheep and goats will be separated,” Risner said. “Your motives matter. Your deeds matter. Persecuted or not, those who push through the hard times will be rewarded.”

What kind of rewards might there be in heaven where streets are paved with gold anyway? In heaven, things will not matter.

Think about standing before God to give an account of your life. But before you can say a word, people begin lining up behind you, The line stretches as  far as the eye can see. These are people who are there because of the time you invested in their lives, because of the money you gave so others could minister to them, because of the things you endured so they could hear the message of truth. This is your reward.

In the end, souls are the only things that matter.

Do you care that others may be left behind?

My daughter knew she wouldn’t be left behind, but still there was this fear lurking inside her. We talked through her salvation experience. After that conversation, she was sure she would not be left behind when Jesus comes to take His bride to heaven.

What about you, are you sure, you will ascend with Christ when that day comes? Have you accepted Him as your Lord and savior?7

Will you hear the words, “Well done, good and faithful servant?”8

What would you need to do today to hear those words tomorrow?