Does God Have A Voice?

When the prominent minister announced he would not run for another term as president of a large denomination, a reporter asked him why. He said, “God told me not to.”

“Did God speak to you in an audible voice?” asked a reporter. 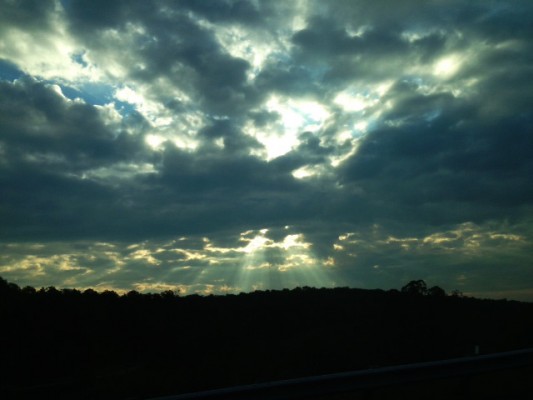 The pastor answered, “No, it was much louder than that.”

Recently a reader asked me a similar question: “Often times you write about how God speaks to you directly with specific words.  The words of God though spoken to you are words that are not found in the Bible.  Do you hear an audible voice? Would you please explain?

The answer to that is similar to that of the pastor in the quote above. I don’t think I’ve ever heard an audible voice from God however many times, I have been arrested by a statement by a speaker, minister or friend that answers an exact question I’ve been wrestling with spiritually and praying for an answer about.

Not all situations, though, involve an answer from a person. Many times when I know God is speaking to me, it comes through a revelation or picture in my spirit. I posted the other day about walking in the water and talking with Jesus, who told me “Girl, I invented music.”

Is that in the Holy Bible? Probably not in those exact words, but didn’t He create everything, us included? Of course, He invented music because He invented us.

I’ve also posted about what I know God told me for years in regard to how to take care of the “mountain of flesh” that had amassed on my body. The reason I remember these things from so far back is I am an avid at journaling.

Many times, I journal my prayers. I write what I’m praying to God about and I write what I feel He is saying back to me. These things come in an impression in my spirit. In 1977, I wrote that God told me to: “Stop eating sugar. Eat more lean meat, fruits and vegetables. And stop eating so much bread.”

It is in my journals at least five times through three decades.

Recently, a reporter asked me one of the best questions. “If God told you to do that, why didn’t you do it?”

I thought for a moment and said, “I didn’t want to do it.” I proceeded to explain how I didn’t think I could do that because I craved sugar constantly

Years later when I came to the end of my rope, I found the strength to stop eating sugar by totally surrendering it on the altar to God. Then He became the wind at my back to propel me forward on this journey.

God Speaks Inside You


Just the term God said is sometimes difficult for others to acknowledge. The honest fact is if you are hearing voices from a being who isn’t physically here, it may mean you are insane. Or it could just mean you are in touch on a different level than others.

The litmus test of any message has to be if it goes contrary to scripture. Even then some things that seem black and white have other scriptures, which define them more. We must take the whole of the scripture before pointing fingers and telling people what they ought to do.

In the final analysis, the question becomes, are we close enough to God to know His heart? Are we reading His word? Do we really want His will or just our will?

John 10:27 has always been a bothersome scripture to me. “My sheep listen to my voice; I know them, and they follow me.”2

The difficult part is I can usually distinguish between the voices in my head. It would either be an impression from God, myself or the evil one, but following the voice of God always seems to take a leap of faith. It forces me out of the comfort zone I’ve allowed the evil one to put me in.

It’s really pretty easy to ascertain if it is me, it is usually me rationalizing eating something that is unhealthy. If it is Satan it is usually a tempting voice.

A friend said today that God whispers, while Satan shouts. That’s so true and it’s why it’s sometimes difficult to hear Him. I think He does that so we will listen more carefully.

God’s voice is soft, soothing, caring, uplifting, encouraging, prodding, probing, enlightening. I hear it and I have one of two reactions. I want to run towards it or away from it

I run away not because God’s voice is condemning. I’ve had God speak to me in my spirit very sternly, but never harshly or accusatory. No, that’s the voice of the Accuser.

The voice of God is One that woos me back to Him. However, it usually means in order to follow Him I’m going to have to take a path that is not going to be easy. I know He will help me, but just getting over that initial idea that what God is asking seems impossible, makes me want to run.

God’s voice is always consistent with His character. We understand His character from the scripture. I’m learning if I follow His voice, I will find that He blazes the path before me.

Years ago, I had a mentor who encouraged me to step out on faith with some things I felt God was telling me.

This instruction is based on Isaiah 30:21, which to me is one of the best ways to understand God’s leading and direction. In the Message it says, “Your teacher will be right there, local and on the job, urging you on whenever you wander left or right: ‘This is the right road. Walk down this road.’”

The interesting thing about this is you have to be walking on the road to be told if you are wandering off or not.

For way too long I feared doing something different because it might be the wrong thing. However, if I am trusting God and walking close to Him, I can’t go wrong.

Steven Furtick, pastor of Elevation Church, explains if you follow God’s ways, you will be in God’s will and do His work. We get stymied trying to find that center bullseye of His will when in reality what He wants us for us to become like Him.

That’s the intent. Whether we live in Alaska or Florida doesn’t matter as much as that we live in His ways.

“Trust God from the bottom of your heart; don’t try to figure out everything on your own. Listen for God’s voice in everything you do, everywhere you go; He’s the one who will keep you on track. Don’t assume that you know it all. Run to God! Run from evil! Your body will glow with health, your very bones will vibrate with life!”3

God’s promise is if we are living close to Him, in right relationship with Him, He will direct us. As we grow in our faith, we will know more assuredly what He is saying to us and when He is saying it.

One final thought, I love it when I get a revelation I know has to be from God. It comes as a flash, an insight, sometimes with a brief visual picture.

Just yesterday, I was pondering why I face every new venture with fear. I understood it stemmed some from a feeling of I will never be good enough, which I heard often in my childhood.

A picture of thousands of hills with cattle as far as the eye can see came into my mind. I thought, “Oh, I see. You have all the money in the world for me, so I don’t need to be afraid.”

I sensed God saying, “Look again. What do you see?”

“What do the cattle represent?”

This came as a solid impression that took only a few seconds, but it has left a lasting impact on me. I don’t have to be afraid of anything. He has the resources to meet any need I may come up against.

Does God speak in an audible voice? Yes, He did in several instances in scripture. I mean once He spoke through a donkey. Think about how Balaam tried to explain that to his friends when He got home.

Just ask Him, if you’re not afraid, and see what what happens.