Ever hear a sermon that you feel is the answer you’ve been praying for only to interpret the message as different from what God might be saying to you? 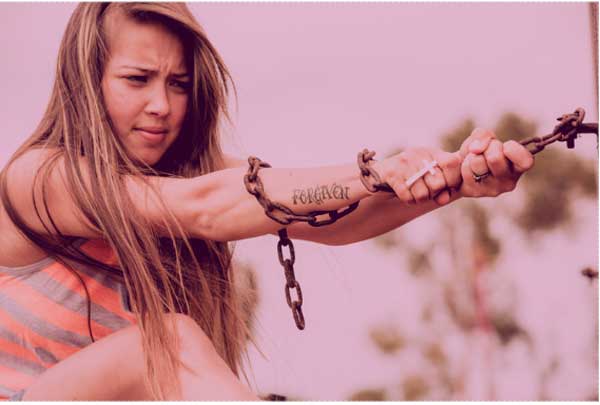 It was fall of 2003. Four years had gone by since the cardiac surgeon had given me five years to live. I had immediately gone a diet and lost 100 pounds. My doctors were happy, but now I was gaining it back.

I was desperate to change. I was hearing a lot of people talk about weight loss surgery. Even the cardiac surgeon had mentioned it.

I had even met with the bariatric doctors at the University Hospital in my town and did not feel like it was for me. Plus they would not do surgery on a person of my size. Now I was really desperate and praying that God give me an answer.

That Sunday, my pastor preached an illustrated sermon. His sermons were always deep and theological, but he didn’t usually use props. He even said all he needed was the Word of God. That Sunday I don’t even remember the text. What I do remember was very visual, which is a way God many times speaks to me.

He illustrated the sermon with varying sizes of chains. The first was a small gold chain on his wrist. “Some of the things which bind us are like this small chain,” he said. “We can get over them ourselves. We don’t need any help.” Then he snapped the chain off his wrist.

To break other chains, he pointed out that we may need people to help us. He had a larger chain he tried to break and couldn’t. He asked another man in the congregation to come and help him and together they broke the chain.

“Some chains need some additional intervention such as a treatment program of some type,” he continued. He brought up an even bigger chain with a large cutting tool. While a man held it on either end, another man used the cutters to break the chain.

“Still other chains,” he said, “are so big they need a different kind of intervention.” That’s when he brought up the largest log chain I’ve ever seen. It took four men to carry it to the platform.

It was the type of chain used to tow a semi. Two other men carried a massive chain cutter. It took both of them to hold it and attempt to cut the chain. They tried several times. The chain held fast and would not be broken.

Then there are those so massive, so entrenched, so binding, they can only be severed by a God- sized intervention. Nothing man-made will help. I immediately identified. I was at the point where I needed God-sized intervention.

Could It Be Surgery?

Nothing had worked so now it seemed the only thing left was the monster fix of them all, a God-sized intervention. I decided that must mean that I needed gastric bypass surgery.

One of my big questions, though, was, “Does God think it is okay for me to alter the body He gave me and made a certain way?” When I asked God about it that Sunday, I didn’t get a clear answer about surgery, but I did know that I needed a God-sized intervention. I didn’t know what that would be besides weight loss surgery.

When I asked God if it was His will for me to have the surgery, the answer I received from Him was a reminder that He wanted me to be a whole, healthy, happy woman of God.

I didn’t ask God what His God-sized intervention could be. I just asked about surgery because in my mind it was the only thing remotely close to that in nature because of the sheer magnitude of it.

The End of My Rope

It felt like my time was growing short. I had a year before the surgeon’s prediction of my death. I felt panic when I thought about it. Surgery seemed the only immediate answer so I did research.

I battled through the insurance process and finally found a hospital in my network willing to do my surgery, even though it was 130 miles away.

I had set my mind to have the surgery, but I was scared. I had read horror stories. Many people had died from this surgery. Many had been scarred for life or had been left greatly debilitated.

I was doing this to live, not to die, but I was at the end of my rope. I didn’t want to live super morbidly obese. I was willing to risk death in order to live and be an active participant in life rather than a bystander.

I was miserable. I felt like I was encased in a fatty living tomb. Like Peter, I longed to have an angel come and tell me to get up and the chains of obesity would just fall off of me. (See Acts 12:7 NIV)

I was miserable. I felt like I was encased in a fatty living tomb.

Surgery looked to me like a magic wand that would make all my food issues go away, even though in my pre-operative appointment the nurses made it clear that the surgery would not fix those with additive behaviors.

I also ignored all the cautions about how weight loss surgery patients have a hard time absorbing minerals. All I wanted was to lose weight. I figured everything else would fall into place after that.

What Have I Done?

The minute I woke up from surgery I cried and said, “What have I done?” Of course a lot of that was the pain speaking. Because of my size I had to have an open surgery and recovery was difficult. More than that I couldn’t eat … anything. Why had I not seen this coming?

Within the first month I was so angry that if there had been a way to undo the surgery I would have. In the first year I lost weight by being on a starvation diet out of necessity. Foods were added slowly back into my diet, but because of the small stomach size I couldn’t eat much without getting sick.

I still craved my comfort foods and wanted to eat all the things I’d had before because I had not dealt with my food addiction. I was just angry at everyone and everything. Even though I was losing weight, I couldn’t eat without the food feeling like it got stuck in my throat.

I wasn’t supposed to drink soda as that stretches out the small stomach created during surgery and basically negates the surgery’s effects. So drinking soda was my first act of rebellion.

Then at about a year from surgery, I found I could eat candy a piece at a time. That was my next area of rebellion. I started eating it all day long. I stopped losing weight and started gaining weight though it was not a quick gain like it had been in the past. Still I was now determined to eat what I wanted once again.

What gastric bypass surgery did for me was show me what a huge sugar addict I was. By having surgery I was attempting to circumvent coming face-to-face with the fact that I had allowed comfort foods to have a stronghold on me.

As a matter fact these days, Dr. Julie Friedman says that weight loss surgery will not fix food addiction because after surgery patients cannot use food to regulate their moods like they could before. This causes them to do exactly what I did. They find a way around it.

William Anderson, MA, LMHC, counselor and therapist, agrees. “I have had a number of patients who have had bariatric surgery, both by-pass and lap band, before coming to me,” he said. “The weight loss from the surgery was temporary, did not solve the problem they had, and in some cases, made things worse.”

Weight loss surgery caused me to realize that my food addiction wasn’t just some small problem that could be easily fixed with a diet or even the monster fix touted by the medical community.

The word my pastor spoke that Sunday in 2003 was indeed just for me. I needed a God-sized intervention, but not a man-made one. My issue was not just physical, it was very emotional, mental and spiritual. It involved all of me.

The chains food addiction could only be broken by God Himself. He was going to have to grab hold of me again in another major way to stop me from once again becoming super morbidly obese. Unfortunately, I was already well on the way to doing that.

Still there was this promise in Scripture. “God will break the chains that bind His people,” (Isaiah 9:4 TLB).

I was His child. He would not relent until I allowed Him to break my chains completely.