Every year I ask God for a word for the year. Last year’s word left in a quandary for several months. I knew the word He had given me was FOCUS, but on what? 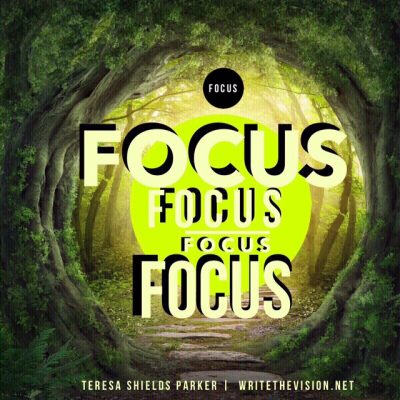 The year of 2013 my word was grace. I didn’t understand the purpose of that word until about April. I was working on a book aobut my 250-pound weight loss. My working title was “Confessions of a Food Addict”.

It defined what I was writing about, but I knew it wasn’t THE title. It was in April the title hit me in an exchange with friend over grace versus works. I write it that more in the memoir which ended up being title, Sweet Grace.

Fast forward to 2014 and I get the word focus. My life started going fast and furiously with speaking engagements and radio and television interviews regarding my journey.

I was also leading a weekly book study of Sweet Grace, which God used to lead me to start and online weight loss coaching and accountability group, Sweet Change. In the midst of this my husband and I took a trip to Florida where I was featured on the Homekeepers show on Christian Television Network (CTN) and also on a Christian Television station in Pensacola.

As Sweet Change began individuals began sharing their moment of change. I define this as the point in time when you realize you have been going towards an unhealthy lifestyle and you turn around and go towards health. For me it was the moment I realized I am a sugar addict. I surrendered processed sugar and began going full-fledged towards health.

One of the biggest questions I was asked after Sweet Grace came out was how do I get to the moment of change. There really is no one formula because what hits one person emotionally doesn’t resonate with another. It has to be an emotional change that translates into a physical change and culminates in a spiritual change.

God dropped into my mind the idea of how to write the book along about September. I emailed several I knew who had lost significant weight and asked them if they would write their story.

I gave them an outline and a deadline. At first it was going to be nine people. That number doubled as everywhere I looked, I was led to others I knew were also on the journey.

It took from September until December for the the book to get written, formatted, designed and uploaded to Amazon. I didn’t do it alone. I had a tribe who helped get all the pieces together.

Looking back I realize I was not just focused for that season, I was hyper-focused, going without sleep, being committed and persistently working towards a deadline to have the book out before January 2015.

The Purpose of Focus

I know God did not give me the word “focus” to focus on speaking, giving interviews, leading the Sweet Grace study, coaching the Sweet Change Group or writing Sweet Change: True Stories of Transformation.

The word was given to me in order to FOCUS on Him. The one thread that goes throughout 2014 is I learned to allow God to lead to me to the next thing. I did not have an agenda for the year, but He did. His agenda was the only thing that mattered.

The only way I could have gotten through the year was to just focus on and follow Him. The verse that kept coming to mind was “My sheep listen to my voice; I know them, and they follow me.”1

The Picture of Focus

During a prayer time I got this picture of me as a little girl trying to trudge through snow taller than me. I couldn’t get anywhere until my Daddy came out with a snow shovel and started shoveling a path.

I saw myself walking right behind him where he shoveled a smooth straight path for me so I wouldn’t fall or stumble or get lost in the tall mountains of fluffy white stuff that could, in reality, overtake and bury me.

In the picture it was my earthly father, but I knew the back of that big strong man was focused always on His heavenly Father. That was where my focus had to be. If it was anywhere else I would be buried in something that looked beautiful, but could inundate me quickly if I didn’t know where to go.

In 2014, my goal was to focus on my heavenly Father who has the plan. It felt very risky to live my life not knowing the plan. My only agenda for 2014 was to follow God in the next thing He had for me.

At times it felt really risky, but then faith is the “evidence of things not seen.”2 So, I live not knowing what the next step will be. I make plans, but I allow God to interrupt them if He wants me to go a different direction. I’ve learned that if I don’t know what to do about something, I need only wait until He shows me.

I have a new word for 2015 and I hope you do, as well. If not, all you need to do is ask God and I’m sure He will lead you to your word for this next year.

Tomorrow, I will share mine for 2015. In the meantime, I’d love to hear about your year. Do you have a word, scripture or phrase you focus on for the year? What is your goal for the New Year?

If you have problems with sugar or losing weight, I invite you to check out Sweet Change Weight Loss Coaching and Accountability Group for the transformation of your life.  JOIN SWEET CHANGE  and get our best price for ONLY a TWO-MONTH commitment now through Jan. 3. Just click this link for more info>>>Sweet Change.

Sweet Change: True Stories of Transformation includes stories of weight loss and change from 18 ordinary individuals, yes, Teresa too! Plus additional information from Teresa Shields Parker. Get your copy as an instant download by going here>>https://teresashieldsparker.com/sweet-change-order/  or on Amazon HERE.

Don’t forget to check out Sweet Grace: How I Lost 250 Pounds and Stopped Trying to Earn God’s Favor and the Sweet Grace Study Guide, both are available as instant ebook download. Just click the book titles to take you to the order page which also has the Amazon link.