I Believe I Can Fly

“You can do anything, be anything with God’s help,”1 Mom told each of her children from the day they were born. However, she was beginning to doubt this was such good advice when her youngest was born.

Tessie dreamed of flying. From the time she was a baby her mom noticed with delight how she followed a butterfly as it flitted from flower to flower. 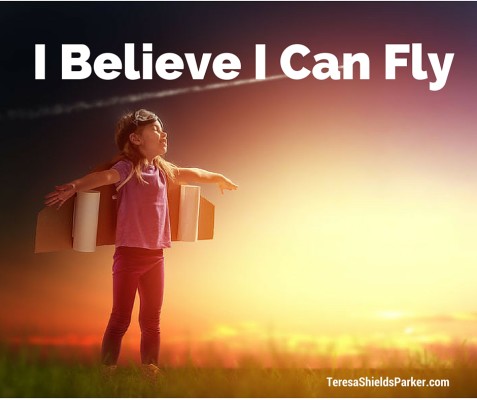 As a little girl she could sit on the deck for hours and watch the small birds with their super sonic wings flit in and out of the hummingbird feeder. She would notice every hawk perched on a fence post and watch enamored as it took flight to join  other birds in the sky.

By the time she started school, every phrase from her mouth began with, “One day when I fly, I’m going to…” Then, she’d proceed to tell her mom where she would go on her adventures.

Encouragement was one of her mother’s gifts. She had always told each of her four children they could do or be anything they wanted with God’s help,1 hard work and intentional effort. Tessie’s older siblings had dreams of being doctors, lawyers and engineers.

All Tessie wanted to do was fly. It’s all she talked about. Her parents, though, were a little concerned when by age 12, she still wanted to fly, not like a pilot, but fly like a bird. She was convinced it was possible.

Her mother did not want to cast disparagement on her daughter’s dreams, but the time came when she her fledgling daughter needed a dose of reality.

“Tessie, you do know you won’t all of a sudden grow wings and fly, don’t you?” her mother asked a bit concerned.

“But Mom, you said I could be anything I wanted with God’s help. I want to be a person who flies. I want wings. He made the birds to fly, so He will help me, too.”

“If you want to see Paris, you can fly there … in an airplane. You can even become a pilot.”

“I want to feel the wind in my face. I want to soar above the earth. I want to touch heaven. I want to fly and be free like the birds.”

“People were not meant to fly, my dear. We do not have wings.”

Going Towards Her Dream

Since flying an airplane was the closest thing she could get to actually being a bird and having wings, when she grew up she became a pilot just to pay the bills. She also became an airplane mechanic. She could take apart and put together an airplane by herself.

“Finally, Tessie has found her niche,” her mother told Tessie’s father. “Being a pilot was really the dream God had for her all along.” He nodded in agreement, but he knew his daughter, and he doubted she would not be satisfied until she had wings.

One Saturday Tessie invited her parents over. “I have something I want to show you,” she said.

Tessie led her parents to a bench in the backyard. “Wait here,” she said.

In a few minutes, they heard the low hum of a light engine. “Mom, Dad, up here,” Tessie called. “I’m flying.”

Her mother gasped. Her father shouted, “Way to go!” Their daughter was not just flying, but soaring through the skies. She was living her dream.

Indeed she was flying. With a small jet engine strapped to her back and her arms in lightweight wings, she was gracefully gliding and dipping like a bird.

She had spent her spare time working on plans she felt God had given her. It kept her occupied when she wasn’t piloting large commercial planes. The plan was a personal flight system with everything from the sleek compact design, down to small personal flight instruments, perfectly designed and constructed wings, guidance system, safety attire and fuel for the small, but powerful engine.

God had showed her how to make the impossible dream possible. Now, she was going to market her system so that others could fly, as well.

You don’t just want to lose it, though, you want to get rid of it for good so you can go forward to accomplish other dreams. Your weight, however, keeps you tethered to one spot, never to move forward, never to soar with your dreams.

It feels impossible, but like Tessie’s mom said, “You can be anything you want with God’s help.” Do you believe that God is a God of the impossible.1 Do you believe you will one day fly, as well?

I do, because I did it. With God’s help, and by His grace, I am flying. Now, I’m teaching flying lessons. Won’t you join me?

“Jesus looked at them intently and said, ‘Humanly speaking, it is impossible. But with God everything is possible.’”1

In order to fly, we first need to #KickWeight. In my new six-month coaching class, I will teach you what I know are the six essentials to God-centered weight loss. This is not another diet program. I’m going to share with you how to work with God for your total transformation—body, soul and spirit. Nothing is an easy fix, but with God we can tap into a supernatural strength for going forward to accomplish our dreams.

This is the rock bottom price I promised you, not $97, not $87 or even $67, but $47 per month. Over 10 percent discount if you pay in full.  Six months of working with me, and we’ll see how high you can fly. I believe you can touch the sky and begin to realize your dreams! Group is open now for introductions, click HERE for all the details.