Five lies and truths about being overweight

One of the first Sundays I helped out in my four-year-old son’s Sunday School class, a cute little boy with blonde curly hair came up to me and said, “Hi, I’m four. Why are you so fat?” Without waiting for an answer, he ran off to make sure the house made out of fake cardboard bricks was properly constructed. 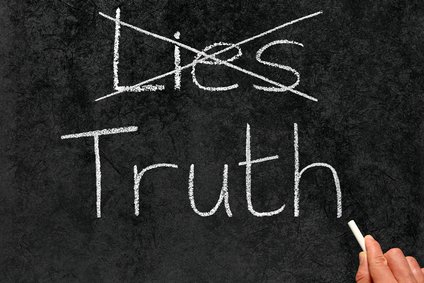 At that time, I was not at my highest weight. I know I weighed over 350 pounds, though. To a four-year-old, I loomed as a giant. He left me to ponder my answer to his question.

Every extremely overweight person has a list of lies and excuses they tell themselves and others about why they are overweight. They have some element of truth in them, but they are half-truths. We tell them to ourselves so we don’t have to face the reality that we need an intervention.

We don’t rattle these off to the average person on the street. I’ve never met an adult who would dare ask Jimmy’s question. I have, however, met many people who looked at me when I was morbidly obese, sighed, shook their head and walked on. Their unasked questions, as well as my unspoken excuses, loomed in my mind.

I can’t afford to eat healthy.

This is an excuse I told myself for years. It is simply not true at its core. Unhealthy food is less expensive but, it is addictive. In the long run, we drink more soda and eat more bread, chips, cookies, ice cream, candy, pizza and on and on.

What is your current go-to snack food? Mine was candy. It was so easy to grab a caramel, unwrap it and pop in my mouth. Unwrapping is exercise, right? Plus, I’m only eating one. Which led to another and another and in a day, the bag was gone.

Let me ask you something, when is the last time you gorged yourself on apples, oranges or carrot sticks?

Truth: Buying healthy food for yourself and your family will cost you less in the long run.

I’d be a bad mother if I didn’t keep snacks (i.e. cookies, chips, etc.) available for my kids.

As a foster parent to three girls and a mother to my own two kids, I bought a lot of groceries. For some reason, I had the idea that a good mom would keep all kinds of snacks around for her growing children.

I had two overweight foster daughters. Their case managers wanted them to lose weight. In the back of my mind was the nagging the thought that perhaps I was contributing to their problem.

Enter Dr. Phil. I listened to one of his programs where he introduced a basic concept I had ignored. Don’t buy junk. Clean out your cabinets of all cookies and chips, anything you can grab easily and snarf down. Throw away the ice cream and candy. Pitch the pizzas. Don’t bring junk into the house.

I did it. I cleaned house. After that, if I had a dollar for every time my teenagers said, “There’s nothing to eat,” I’d be rich. I admit, it did make me feel a little guilty. But I stuck to my guns and pointed to the fruit.

Truth: They liked fruit better and I was a better mother for providing it.

I don’t eat that much.

After ridding the house of junk food, I realized something I hadn’t admitted before. I was the one who had been eating the majority of the junk food. I ate it without even thinking about it because it was accessible and quick. High carbohydrate-laden junk food also gives an immediate energy boost, making you feel better. This goes away just as fast necessitating another fix.

I also didn’t count it on any food dairy. I was fairly regular meals at lunch and supper. I was eating maybe a piece of toast for breakfast. If I were eating only those foods, I wouldn’t be loosing, but I wouldn’t be gaining either.  No, the food that made me gain weight were all the in-betweens, foods eaten in secret, foods eaten at a drive-through as a reward, sugar-laden snacks. And, it was a lot. I denied it, but my body gave away my secret.

Truth: I ate the majority of the unhealthy snacks.

I need more food because I’m heavier to begin with

There is an element of truth in that people who weigh more can eat more than a smaller person. A sedentary person who weighs 350 pounds supposedly could eat 2700 calories a day and not gain weight. However, an obese person has more fat and only a small percent of fat tissue burns calories. The remaining fat tissue does not burn calories.

In order to lose weight, take the advice of a friend of mine who has lost over 100 pounds. Take the weight you want to be, in her case, 130 pounds. Multiply that times 10 and eat that many calories each day. She consistently ate 1,300 calories a day and exercised every day to lose the weight.

This is perhaps one of the biggest lies. For me, sugar and breads are like a drug. They entice me. I cannot eat just one. I overdose every time. It’s not because I’m hungry, it’s because I’m addicted. I found I feel better and live better if I don’t eat bread, sugar and wheat flour.

I also realized I was a drug pusher. My foster daughters had been snagging junk food from the pantry after we went to bed.

Like any addictive substance, junk food lies to you and says you can’t live without me. However, as the gatekeeper in my household, the one who bought and brought unhealthy food into the house, I made the decision to keep it out.

A good mother promotes healthy snacks, fruits, protein snacks, vegetables, to fuel her children’s bodies. Kids eat what we eat. It was difficult for me to realize I was actually contributing to my children’s unhealthy food habits.

Truth: Certain foods can and are addictive. They are not necessary to our survival. We can do without them.

I admit I liked the accolades of being the mom who baked the best oatmeal cookies. I wanted to be praised for my cooking. It didn’t matter if I was slowly killing myself and my children, as long as we were happy, right? Wrong.

I began turning things around for myself and my family. It was and is not an instantaneous thing. It takes time, commitment and intentional effort. Feeling better, becoming healthier, though, is worth every minute of doing without chips and cookies.

Am I perfect in what I eat? No, not by a long shot. I am still a work in progress. However, I have put some things in place to keep myself within the boundaries I know propel me towards my goal of health.

It all comes down to this, what do you want?

What lies have held you back from reaching your dream of being healthy?