If you are married, what keeps you in your marriage. In a day and age when many get divorced and even fewer want to get married, is there a divine glue that helps bind us with our spouse?

Last week, my husband and I were reminiscing about our 37 years of marriage. He said, “Have you ever thought what our life would be like if we hadn’t been Christians? Would we be different or would we be doing things pretty much the same?” 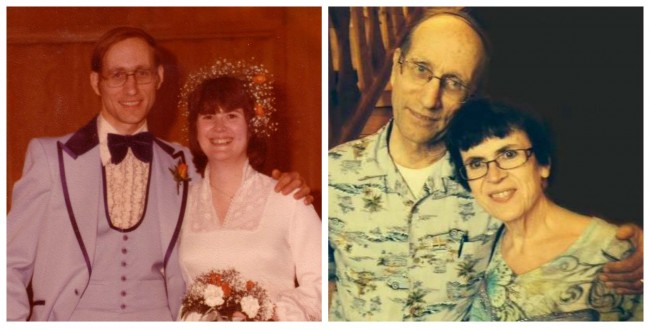 I said, “First, I doubt we would have ever met much less gotten married, since we met in Christian coffee house. And if by some chance we had met and gotten married, I’m quite sure you would have divorced me long about year six.”

Year 6 was the rocky year for us. I talk about this some in my book, Sweet Grace. See, when we got married, I had this fairy tale idea that when we would be inseparable. We would do everything together and always want to.

He would worship the ground I walked on and I would take care of him, cook his meals, clean his clothes just like my mother did for my father. He would do all the things my father did when I was growing up.

I started into the marriage unemployed. Although I was looking for a job, things were tight financially. I played Suzy homemaker doing what I thought he wanted done. I was waiting for him to come home and swoop me off of my feet and attend to my every desire, including my list of things that needed to be fixed around the house.

While there has been plenty of “swooping” in our marriage, the idea that he would drop everything to do exactly what I wanted was more than a bit selfish on my part.

He had worked all day. He was tired. He wanted a good meal, a nap in front of the TV and early to bed to get up for work the next day.

I felt slighted and neglected.  Arguments ensued long about the second year when the honeymoon phase ended. Roy is a very independent sort of man, a loner. He gets along fine by himself. He liked doing things with me, he just didn’t want me to have his evening planned from the minute he walked in the door.

As a last ditch effort, we went to a counselor. The counselor helped.  I learned to grow up and accept responsibility for myself instead of abdicating my happiness to him.

In the midst of everything, I found out I was about three months pregnant. This added to the melee. I prayed more those six months than ever before. I read Christian books. I devoured scripture. I sought godly counsel.

I realized I was a strong woman. I could raise a child on my own if I had to, but it was not my preference. Still, I submitted totally to God and His protection over my life, my husband’s and my unborn child’s.

He stayed. Our son was born and he love him instantly. Still, everything was not solid with us. I knew he was still not happy. I was still praying fervently. I wanted God’s will and I knew he did as well.

One Sunday, our pastor preached a phenomenal sermon. I know it was so because of my husband’s reaction. I, however, can’t remember a word of what was said. I was planning the noon meal.

When he shook the pastor’s hand after church, he talked with him for quite a while and gave him an uncharacteristic hug.

After that day, he was fully committed to our marriage. It was a turn-around that only God could orchestrate. When I asked him what happened, he just says, “God helped me realize how much I want this to work and that love is really spelled commitment.”

Our lives became more God-centered than before. It was as if church had been the main emphasis and suddenly God became the main focus.

I had finally realized God desired me to focus on Him first and foremost. My husband and children became focuses that God directed me towards at His bidding.

God restored and redeemed my marriage in spite of my ignorance. More than that, He did so because He wanted me to understand that focusing on Him is where the victory lies.

When we were dating, Roy sent me a note that said something like this: “If you love someone, let them go. If they don’t come back, they never were yours to begin with. But if they do, your joy will be 100-fold.”

That was prophetic regarding our marriage on several levels

Another “prophetic” thing he told me before we were married is that “love is a three-strand cord between husband, wife and God. God is pinnacle. Both husband and wife have to put Him first for the marriage to last.”

In the midst of difficulties, even marriages that start out on the right foot can reach rocky times. We cannot control our spouse. We can only cling to God and cry out for Him to intervene and make the way clear.

No matter what happens, if God is first, even if the marriage dissolves, we will survive if we hold tight to God.

“A person standing alone can be attacked and defeated, but two can stand back-to-back and conquer. Three are even better, for a triple-braided cord is not easily broken,” Ecclesiastes 4:12 NLT