Dare you to move

Every generation seems to ask some of the same questions. Why am I here?  Where am I going? What’s my purpose? Where am I? Does my life matter? 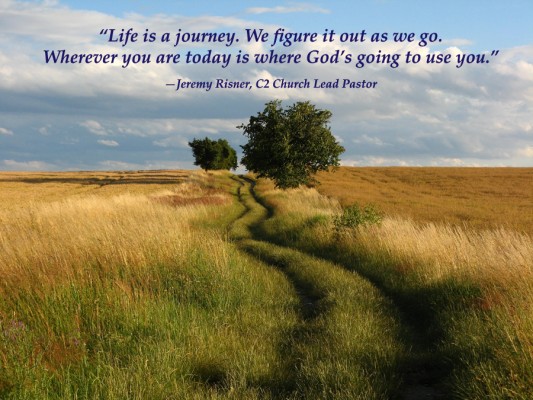 I remember my senior year of college clearly.  I’d spent four years of my life answering my professor’s questions. Now there was a question everyone was asking that I had no answer for. What are you going to do when you graduate?

I have no idea just didn’t seem like the appropriate response coming from an almost college graduate. Wasn’t I supposed to have some answers by now? I was 21. I had been going to school all of my life.

I was ready to get on with the thing I was supposed to do because I knew that life would be over in a blink. I wanted to make an impact, help desperate people, save the world. I just wasn’t sure how or where or any of the 5W’s my journalism professor was so found of drilling into my head.

Why am I here?
Even at a Christian college there was a pull to apply for the jobs that make the most money and provide the most security. It seemed I was being encouraged to live for myself. If I could be successful, I would be happy and live to be 80.

I didn’t think much about it then, but it is really true that “avoiding death is not living,” Jeremy Risner, C2 Church Lead Pastor, explained, during his series Soundtrack of My Life.  “It’s just 80 years of trying not to die.”

The important thing for young people and adults to understand is that their life matters and makes a difference, according to Risner.

“For in Him all things were created: things in heaven and on earth, visible and invisible, whether thrones or powers or rulers or authorities; all things have been created through Him and for Him” (Colossian 1:16).

Where am I going?
Ah, the $64,000 question that I had no answer for. I needed a job after college. I thought I had a great one lined up, staff writer for the Southern Baptist Foreign Mission Board. Since my degree was in journalism and Bible and since missions was a passion of mine, it seemed perfect.

I interviewed and I thought I had the job, only to hear I was passed over for a Baylor girl. Really, a Texan? I was mortified. I had a summer camp counseling job lined up but after that, I was toast.

Had there been such a thing as a GPS back then I would have asked it where I was and how could I get to significance from where I was. I had no idea how to get where I needed to go.

It’s a little like the question God asked Adam and Eve in Genesis 3:9.  “Where are you?” Ever wonder why He asked them that? Did the Creator God lose them? “God knew where they were,” Risner said. “He wasn’t asking for Himself, He was asking for them.

“Where are you in relationship to God? Switchfoot asks, ‘Is your life who you want to be?’ Before deciding your destination, you have to take an honest assessment and figure out where you are at. What have you been living for? Why have you been living that way? What’s been the soundtrack of your life?”

“’For I know the plans I have for you,’ declares the Lord, ‘plans to prosper you and not to harm you, plants to give you hope and a future’” (Jeremiah 29:11).

God already knew the plans He had for me.  His plan was a whole lot bigger than what I was going to do at the end of the summer. His plan had more to do with making me more like Jesus.

Does my life matter?
Our culture’s soundtrack tells us that we don’t really matter. Actually if we listened to what culture says only the rock stars and movie stars or those with money and fame matter.

God, of course, doesn’t want me to sell out. He says I matter and have a purpose. Psalm 139 tells me and you that we matter to Him.
“Your eyes saw my unformed body; all the days ordained for me where written in your book before one of them came be be.”

Where do I go next?
I had placed a tremendous expectation on myself that by the end of college, I would know exactly where I was going and how to get there. I’d have it all figured out.

This, of course, is just not true. “Life is a journey and we figure it out as we go,” Risner says. “Wherever you are today is where God’s going to use you.”

I was comparing myself to all of the other college graduates with great jobs and grandiose plans for master’s and doctorate degrees. As Risner says, “We always compare what we don’t know about others to what we know about ourselves. There is no life that is supposed to be except what God is doing in you.”

1 Peter 1:3-4 tells us we already have everything we need in Christ. Romans 8:28-39 tells us we are more than conquerors through Christ.

Switchfoot’s song dares us to move. “There are two doors in front of you. You can’t make a wrong decision when you’re living for God.”

I went to camp and had an awesome time teaching art and photography and bonding with my five senior high girls. Halfway through the summer I got the call from the board. The Baylor girl got married. Did I want the job?

Yes! Just dare me not to move.